For more than 30 years, DeKalb Metal Finishing has placed an emphasis on working with part makers that specialize in rubber to metal bonding. This emphasis began by developing methods for plating pre-bonded assembled rubber components in a manner that had no impact on the breakdown of adhesives. As corrosion requirements became more stringent and technology progressed, we began applying coatings that were highly resistant to corrosion and could be bonded after plating. At present, our zinc, zinc-iron, and zinc-nickel coatings can all be applied to pre-bonded components. Our zinc and zinc-nickel coatings can be applied before bonding and provide a clean, bondable, and corrosion resistant surface. 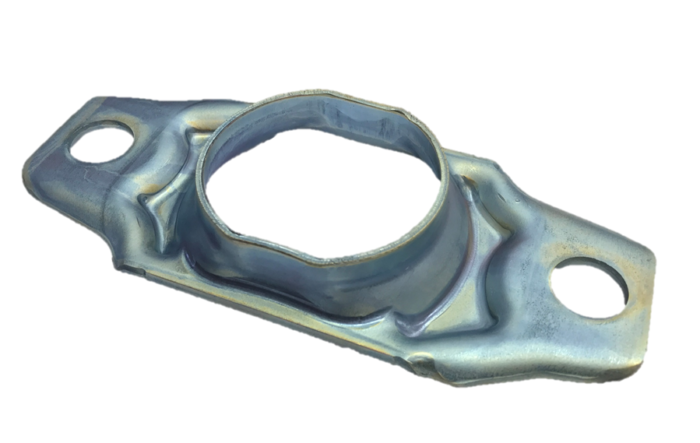 There are three main ways that bonding can occur between two materials: mechanical bonding, where one surface “locks” with another (rather like a jigsaw); covalent bonding (chemical bonding where electrons are shared between two atoms or molecules) or bonding due to Van der Waals forces, which occurs when the positive, proton charged nucleus is attracted to an electron from another atom (no electron sharing).

OUR ZINC AND ZINC NICKEL COATINGS ARE DESIGNED TO MAXIMIZE ADHESION

Adhesion is the property which an adhesive must stick to a surface rather than to itself. In the plating applications that we offer, bond strength comes primarily from Van der Waals forces and mechanical bonding; chemical reactions between the surface and the adhesive don’t normally occur.

Rubber to metal bonding is strongest when the adhesive is spread thinly over a wide area. A thin layer of adhesive reduces the likelihood of cohesive failure. Spread over a large area, the combined forces of Van der Waals and mechanical bonds can give a powerful bond, even if each individual bond is relatively weak.

RUBBER TO METAL BONDING THAT BALANCES CORROSION WITH ADHESION

At DeKalb Metal Finishing, we are continually investigating new coatings that can improve corrosion resistance and improve adhesion properties. Call us at (260) 925-1820 to find out more.